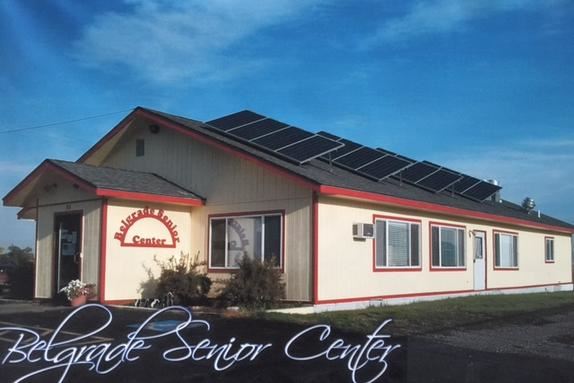 The Belgrade Senior Center exists to promote friendship and serve individuals aged 50 and over living in the Belgrade area with nutritional, social, recreational, health and educational services.

History of the Belgrade Senior Center

It all began in 1972 with 9 original members, one being Rosa Clark (who lived to be 110 years old). Florence and Henry Shepherd, Ed Iverson, Jenny Veltkamp, Tina Feddes, and Elizabeth Veltkamp and others were among the first few who began by delivering hot meals to area seniors. The senior center was incorporated as a 501(c) (3) non-profit organization at that time.

The first meetings were held at the Federated Church (now the Community Church on Broadway). In 1973 the town made available 800 square feet of space in the city complex building on Broadway, which they used for several years. In the late 70’s membership reached 120 members and activities became overcrowded which led to the need for more space. Parking was limited in this location however the attendance was very good for the noon meals and various activities. The city offered a lease of ground in exchange for regaining use of their municipal space. The growth of Belgrade was beginning at this time also. The seniors were given permission to build on this leased ground that is at the present location on the corner of Broadway and East Cameron north of Belgrade.

In March of 1987 committees were formed to raise funds for a new building. This reached $39,000 and a 40-year lease was signed with the city. An additional $30,000 was contributed or donated through labor and materials. This allowed the foundation, shell, and outer portions of the new center to be completed by late July 1987. Another $40,000 was needed to complete the facility. The County, City, Businesses, Organizations, family and individual contributions helped. Selling food at the concessions for ballgames also brought in some revenue. Later a grant was received from Burlington Northern Foundation for paving the parking lot-- at about the same time the city paved the street in front of the building. Money was also raised through fundraising events such as; pancake suppers, rummage and baked goods sales, spaghetti feeds and catering.

About the same time, Gallatin County Nutrition program became involved through the Area IV Aging Services for help with the meals program i.e. noon meals and meals-on-wheels. Funding for the senior center is from various sources. The Gallatin County, Title III, Gilhousen Foundation, United Way, donations, membership dues, and fundraisers put on by the seniors to meet operating costs. Currently the senior center is open for noon meals Monday through Friday and for home delivered meals. Recent improvements to the grounds surrounding the center involved many, many, supporters, volunteers, and major contributors that made this project happen.

The Belgrade Senior Center is the result of on-going support throughout the years to make it the asset of the community that it is today.